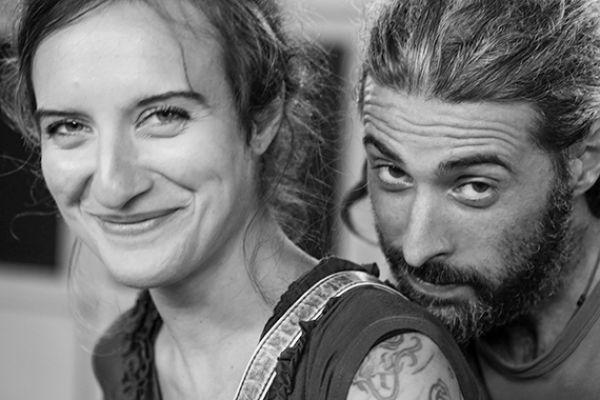 Both linked by a shared passion for cinematographic art, Carla Grippa and Marco Bertora have been collaborating since 2008 in the creation of audiovisual documents, their bond distributed over different training and professional paths that diversify their skills:

Carla Grippa is a film operator. She works in the audiovisual production branch, either for TV programs (RAI, Sky) and films, as operator and technician.

Marco Bertora, graduated in 2010 at the Faculty of Education in Genoa University, with a research thesis in cultural and visual anthropology. His passion for film narration, has led him to deepen the directorial and design aspects of video making.

United by a common interest in the image and in social-cultural investigation, their aim is working on the territory in an integrated manner, with projects that should make us consider the results and paths of urban and social transformation.

Since 2013 they have been members of the Cultural Association Probable Laboratory Bellamy.

They collaborate with the Visual Sociology Laboratory respectively as videomaker and tutor in training workshops.

IL CASO DIGA (produced and financed by the municipality of Genoa in collaboration with the National Institute of Urban Planning INU, 2009, it is an investigation about the construction of the Diga di Begato and its perception for the inhabitants).

PER VIE TRAVERSE. RACCONTI DAL GHETTO DI CROCE BIANCA (research documentary made in 2010 that investigates how the urban territory in which people choose (or do not choose) to live, deeply influences human relationships and lives. The documentary explores all the socio-architectural aspects of a small, defined area, searching for a constant comparison and dialogue between the territory and its inhabitants).

TUNIS APRES DEGAGE (produced by Ghett’up in May 2011 in collaboration with Federico Telari. Made in Tunis on the occasion of the demonstrations for the fall of the dictatorial regime of Ben Ali).

NESSUN FUOCO NESSUN LUOGO (documentary film made from 2012 to 2015, with the support of Caritas Italiana, Caritas Diocesana of Genoa, University of Genoa, in collaboration with the Associazione Laboratorio Probabile Bellamy. It narrates with intimacy the day-by-day life of people who haven’t got no fixed dwelling).

OPACO (film set between Liguria and Piedmont, tells of the landscape and the relationship between man and nature. Produced by Artescienza s.a.s and co-financed thanks to the resources of the Audiovisual call for proposals of the Liguria region 2018/2019)